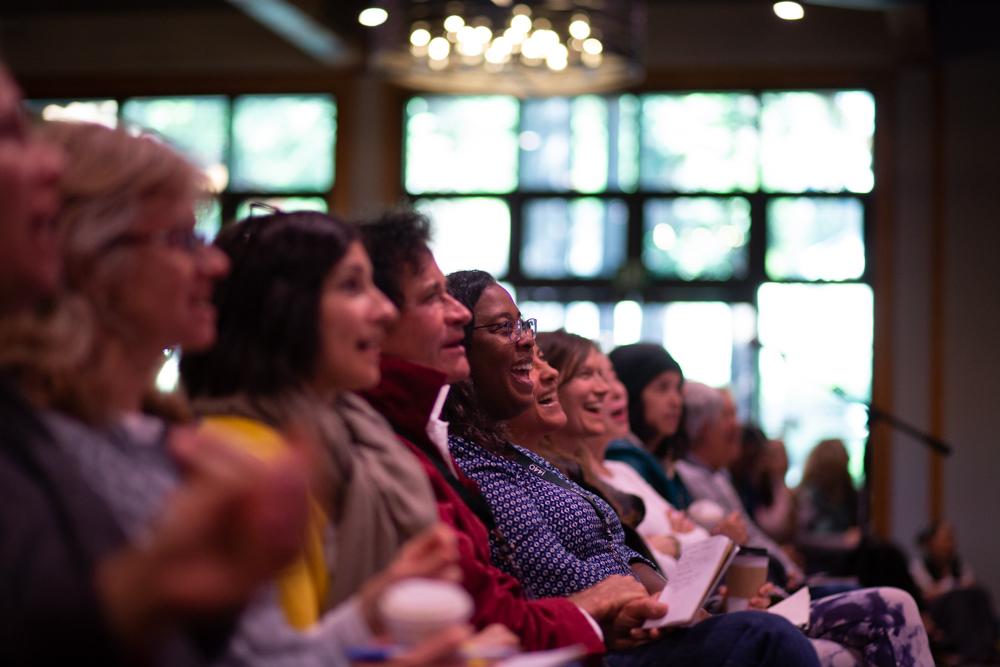 After 9/11 plunged the world into a new era of war and terror, it would have been understandable to wonder if Tom and Ruth Ann Hornaday were funding a pipe dream: a center at UC Berkeley dedicated to studying positive human qualities such as love, kindness, gratitude and happiness.

But the Cal alums didn’t become successful — Tom was a shopping mall developer in Phoenix, Arizona — by investing $1 million in pipe dreams. To the couple, it made sense to give money to new areas of science that had begun to seriously question the prevailing view that humans are hard-wired to compete, fight or act out of self-interest, whether in global politics, business or interpersonal relationships.

The couple, who graduated from Berkeley in the early 1960s, believed that “you can’t have peaceful institutions without peaceful people.” After connecting with like-minded scholars at UC Berkeley, the Greater Good Science Center was born — in the same year as the devastating 9/11 attacks.

“I’m just somebody that cares about other people,” Tom Hornaday said. “I’ve always been that way. I grew up during World War II with really bright parents, not wealthy but middle class, but they were good, smart people.”

After their daughter died of cancer in 1993, Tom and Ruth Ann Hornaday also decided they weren’t interested in amassing wealth for wealth’s sake.

“I talked to Ruth Ann, and I said, ‘We’ve made enough money, and we don’t need to keep stocking up our chips,’” Tom said. “We can put it towards something and watch it grow and have a positive impact while we’re alive.”

SInce their initial investment, the center has been at the forefront of sponsoring research into peace and well-being — employing new perspectives in psychology, sociology, evolutionary biology and neuroscience. This research, among other things, has begun to show that empathy, cooperation and other “pro-social” qualities have always been key to human survival.

One of the center’s scholars is founding director and Cal psychology professor Dacher Keltner, who explores the evolutionary origins of human goodness through the center. People got Charles Darwin wrong, Keltner explains in his own books, as well as the center’s popular “Science of Happiness” e-course. Darwin’s theories don’t justify the “survival of the fittest” ethos that dominated much of 20th century thought on human nature.

Instead, Keltner explains, Darwin believed that humans are a profoundly social and caring species. In a 2009 article for Greater Good, the center’s widely read online magazine, Keltner wrote that “communities of sympathetic individuals” were most successful at raising healthy offspring — “the sine qua non of evolution.”

“I think a lot of our growth has paralleled, benefited from and contributed to developments in major scientific fields,” said Jason Marsh, the center’s executive director and founding editor of Greater Good magazine. “We have always worked to get knowledge out to the community that can support people’s everyday lives.”

Greater Good reaches an average of nearly 1 million readers per month, but its content has become especially resonant in the past few months as people face another global emergency — the COVID-19 pandemic, Marsh said. The center has produced articles on finding purpose during a lockdown and reducing the stress of homeschooling. Senior fellow Christine Carter, author of the new book “The New Adolescence: Raising Happy and Successful Teens in an Age of Anxiety and Distraction,” penned an article on helping high schoolers deal with the loss of graduations and proms.

In addition to the magazine, the center also produces blog posts, white papers and a podcast that illuminate research into how parents can raise caring, resilient children and why yoga, meditation and mindfulness practices — which were just moving into the mainstream when the center first started — improve people’s physical and mental health.

The center promotes “the greater good” by making this research available to parents, teachers, health and business professionals and community leaders, Marsh said. It also sponsors a number of community-based initiatives. One involves using “evidence-based” strategies to bridge political and social divides, and another on “Raising Caring, Courageous kids” has distributed a total of $1 million in grants to schools, churches and community centers to help parents “nurture strengths like generosity, gratitude and forgiveness in their kids.”

Tom and Ruth Ann Hornaday said they are awed to see how the center has grown and what it has accomplished, both in terms of scholarship and in changing the conversation about how people can improve their own lives and the institutions that serve them.

“We love it. It’s amazing to see what it’s done,” Tom Hornaday said.

What the science shows

The Greater Good Science Center promotes nearly a dozen “keys to well-being,” which include compassion, gratitude, diversity and social connection. Here are highlights of the research shared by the center’s online magazine, “Greater Good.”

Compassion: In 2004, UC Berkeley psychologist and center co-founder Dacher Keltner penned the article, “The Compassionate Instinct,” which reveals that Darwin believed that emotions had an important adaptive function and that neuroscientists have found that areas of the brain associated with pleasurable emotions activate when people help others.

Empathy: Researchers generally define empathy as the ability to sense and imagine what someone else is thinking or feeling. They also say it is fundamental to our emotional and social lives. According to Greater Good magazine, empathy appears to have deep roots in our evolutionary history and may have a genetic basis, with elementary forms of empathy being observed in primate relatives and even in dogs and rats.

Gratitude: A 2017 Greater Good article, “The Evolution of Gratitude,” delved into studies of chimpanzees, capuchin monkeys and young children, which show that gratitude and reciprocity are important parts of human social relationships.

Forgiveness: Psychologists define forgiveness “as a conscious, deliberate decision to release feelings of resentment or vengeance toward a person or group who has harmed you, regardless of whether they actually deserve your forgiveness.” A study from Hope College in Michigan concluded that forgiveness “may free the wounded person from a prison of hurt and vengeful emotion, yielding both emotional and physical benefits, including reduced stress, less negative emotion, fewer cardiovascular problems and improved immune system performance.”

Awe: Former UC Berkeley doctoral student Craig Anderson worked with Keltner on studying the evolutionary function of awe. In a 2016 interview, Anderson said: “When we are faced with things that blow our minds, things we don’t fully understand, we want to learn more. And you can imagine, in the evolutionary scope of things, that people would feel awe as they look out over a valley or something, and that feeling might make them more likely to explore and gain, for example, more food resources.”

China comes to defense of WHO, slams U.S. decision to withdraw

Ask Amy: I want my unhappy neighbor to leave me alone

This may take a second or two.